KG, a veteran musician with over 40 years of experience, has been fronting numerous blues bands in the Northwest since 1990. KG received multiple Cascade Blues Association Muddy Award nominations for Best New Act with the bands KG Jackson and Shakin’ Ground, Double Deuces, and KG Jackson and The Shakers. He was also nominated in 2006 by the Cascade Blues Association in the Best Male Vocalist category in a final field of three that included Curtis Salgado.

KG’s most recent band project, The Kings of Blues Tribute Band featured KG on vocals and bass and also showcased guitarists Peter Dammann, Kenny Blue Ray, and Michael Osborn, former guitar player for John Lee Hooker. KG is also a prolific songwriter and pens many of the songs The Mudbugs performs. KG, along with his wife Candy, founded The Mudbugs to showcase their love of Americana-Roots music.

Having grown up in the desert town of Barstow, Calif., country music was an inevitable influence on KG. You will hear that influence in many original tunes by The Mudbugs, which may include a yodel or two by KG. 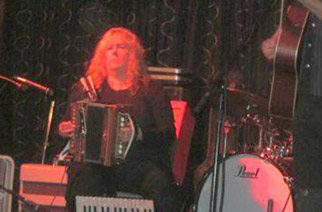 Having played piano since childhood, Candy picked up the accordion after discovering a passion for Zydeco music and dance. She learned to play accordion at Port Townsend’s annual Blues Camp under the direction of Jude Taylor, Sunpie Barnes, and Corey Ledet, who are all Zydeco veterans from Louisiana.

Her influences include the great Clifton Chenier, Buckwheat Zydeco, Nathan Williams, Lyn August, and of course her mentors Jude, Sunpie, and Corey. After KG invited Candy to join his band KG Jackson and The Shakers, she was honored to be part of their Muddy nomination for Best New Band.

Candy studied washboard with the incredible Washboard Chaz and most recently began to tackle Cajun single row button box. Candy’s vibrant personality and intuitive musical ability perfectly round out the unmistakable talent of her husband, bandmate and best friend.

Listen to our music